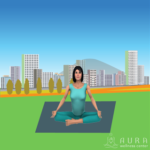 How relevant are the Yoga Sutras to today’s practitioners. Yogic philosophy had its beginnings within early Vedic civilization. This was a very advanced civilization that inhabited the regions now known as India and Pakistan. Their Sanskrit scriptures, known as “The Vedas,” gave rise to the texts on which modern-day Yogic philosophy is based.

Although written records of Yogic philosophy exist, many of the traditions were passed down orally from teachers to students over thousands of years. Hatha Yoga – the style from which modern practices arise – is largely based on Patanjali’s Yoga Sutras, a text in which he explains the eight limbs of Yoga still recognized today. Vedic sages started with the first step and progressively practiced each one for years before reaching the culmination of all eight: Self-realization.

5. Pratyahara – withdrawal of the senses

Patanjali also described nine obstacles to the practice of Yogic methodology that are just as relevant in the 21st century as they were thousands of years ago:

Toward the end of the 1800s, Swami Vivekananda taught Patanjali’s principles under the name of Raja Yoga. While Patanjali’s Sutras were the major scriptures in the development of Yoga training, other texts were also important:

Although the physical poses (asanas) date back before the Hatha Yoga Pradipika, they were not widely practiced by the public in India until the early 20th century. In 1946, Paramahansa Yogananda introduced the Kriya style of Yoga in his book, “Autobiography of a Yogi”. In 1948, Ashtanga Vinyasa Yoga was introduced and became the system from which many Hatha systems in the United States were patterned during the 1960s.

Although the philosophy of authentic Yoga training is about a way of living, Yogic methodology today is often used to describe the physical practice of poses for the sole purpose of exercising and improving health. To reap the true and deeper benefits of the practice, practitioners would need to find a class that embraces the original teachings of the ancient Vedic texts – along with asana, pranayama, and meditation.

Let’s be honest with ourselves.  Most practitioners are too busy for the traditional Yoga teacher training course, which involved a long-term apprenticeship under the careful guidance of a Guru. Going through long apprenticeships and levels of dedication as a formal student within a specific lineage with one Guru is a thing of the past.  Do you have 10 years to leave your family and live in a monastery or an ashram?  Can you leave your job and loved ones behind?

For these reasons, Yogic methodology and philosophy will continue to grow with online education and Internet networking.  It is up to us as teachers and practitioners to look deep into the Yoga Sutras, Vedas, and writings of the past.  In this way, we can pass the torch to the next generations of teachers, who will surely be more advanced in their ability to absorb the Yogic teachings of the past.

See our testimonials to find out what our graduates have to say about our selection of online yoga and meditation certification courses.

Please feel free to share our posts with your friends, colleagues, and favorite social media networks.

This page may contain affiliate links. If you use these links to buy something, we may earn a commission. Thank You!

What are the Benefits?

Read more about the benefits of becoming a free member of Yoga-Teacher-Training.org